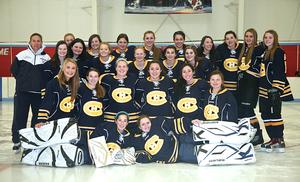 When most people hear about the Hanover girls hockey team, the usual response is something along the lines of: ‘we have a girl’s hockey team?’ Why yes, we do and believe it or not it’s pretty awesome. The team is combined with the town of Cohasset and coached by Deb Beal, a teacher in Cohasset. The season starts in December, and practices are held mostly at Pilgrim Rink in Hingham. Games are played all over the South Shore.

When asked about playing with girls from Cohasset, Hanover sophomore Sam Taylor said, “I love it. They are very nice.”  Hanover and Cohasset are set to break into their own teams by the end of this season, much to the chagrin of players. The girls liked playing together so much they fought the separation each season.

The team started back in 2010 after much planning. It began as a JV team but the next year stepped up to varsity. Though the team hasn’t won many games (as you can see from the stats below) they always play hard and bring their A game every time.

That isn’t to say beginners aren’t welcome. Beginners were what the team was originally based on. The Hanover/ Cohasset team operates based upon a philosophy where the more experienced players play the varsity games and the beginners on the JV team play scrimmages with other JV teams. If you are just starting out it is the perfect set up, because you get ice time each week at practice and games that are just for fun. Molly Cameron, a Hanover sophomore, says to beginners, “It’s the best thing you could ever do and you won’t regret doing it!”

Since most people don’t really know about the team it’s sometimes hard to find new players. Most of the current players  found out about it from friends or from being on the town girls’ team (yes, that’s a thing too). What the players like most about playing hockey and being on the team is the challenge and the friends they make.

If you decide to join the team, it is a good experience. Even if you don’t, it would be good to follow the team’s games and see all the great achievements they make!

Kayla Garity is a member of the team.

One thought on “Hanover Girls Hockey: Team, Myth or Legend?”