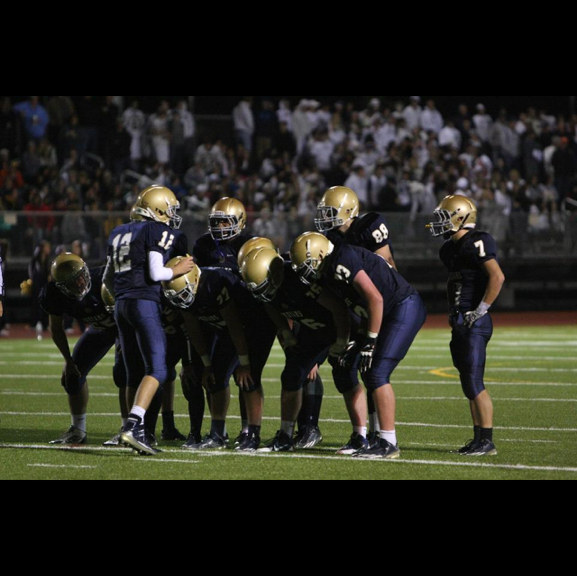 The Hanover High football team wasn’t supposed to be having this kind of year. After an exceptional season last year led by a gifted senior class, it was the opinion of many that the program would take a step down this year. After all, only 3 two-way starters returned to the team: Steve Cockey, Seamus Boutin and Mike Canniff. Lots of players took ribbing from their friends throughout the off season about how the team would finish 2-9 or 4-7 at best.  Barring a catastrophic collapse, the Indians will exceed those grim predictions with ease.

The Indians have been playing some of the best football on the South Shore this fall and they don’t show signs of stopping. The season started off with a game at Silver Lake where they pulled away for a 27-7 win. The game was the first indication to fans that the Indians were going to compete this season. Sophomore running back Brad Rogers ran for over 100 yards getting two touchdowns and was involved in what could have been the play of the year for the Indians. Rogers took a hand off and after picking up a couple of yards, started to go down. Sophomore  lineman Pat Flynn hoisted the stumbling Rogers off a Silver Lake defender and released him into the open field for a big play.  Hanover moved the ball well all game and played stout defense.

After a bye-week, Hanover went on the road to the brand-new East Bridgewater high school to play the highly regarded EB Vikings. The last several years, EB has had a reputation of having an electric offense combined with a rugged defense. Hanover was able to play well on defense, allowing its only regulation time touchdown on a play where the EB star wide receiver Jake Peterson broke a couple of tackles and got into open space. But similar to EB, the Hanover offense’s woes prevented

them from capitalizing on their defense. Hanover couldn’t move the ball in the air or the ground and running back Brad Rogers got hurt in what would be a potentially season ending injury. Late in the game, trailing EB 7-0, junior running back Dimitry Laforest took a handoff up the middle, popped outside and took the ball for a 37 yard touchdown. After a defensive interception, Hanover got in striking distance again with about 50 seconds left, but a throw over the middle was intercepted. Early in overtime quarterback Joe Byrne was intercepted again and it took EB only two plays to clinch an 13-7 Overtime victory.

While the East Bridgewater loss was demoralizing, Hanover rebounded against a weak Pembroke team for a 21-7 victory at their place. Joe Byrne threw a touchdown pass to Seamus Boutin and Dimitry Laforest had two touchdown carries. The Indians were also able to force five turnovers in the game.

The following week Hanover held their home opener against league favorite Scituate and their star quarterback Christian Brady. Brady became an after thought as the Hanover starting defense held Scituate and their weapons to 13 points in what would be a 47-26 victory. Scituate’s 1st offense scored twice on Hanover’s second D later in the game. The real stars of that game were Seamus Boutin and Dimitry Laforest, who had 3 touchdowns each. Fullback Steve Cockey would add a 4 yard touchdown run of his own as well.  Laforest was untouchable all night, including on kick return. He weaved his way to three touchdown runs with lengths of 52, 29 and 9 yards. Boutin was an offensive weapon in the back field where he ran for 2 touchdowns and as a wide receiver where he caught a 37 yard touchdown. Hanover controlled play on offense, defense and special teams. Scituate had no chance to make something happen after Hanover got rolling and it was a long night for the Sailors.

Hanover has come a long way from a team that lost a huge talent base to now a real state championship contender. The Indians still have lots of work to do. Mike McLeod, a captain who plays OG/MLB for the Indians, had some perspective on how the Indians can improve. “The season has gone very well so far. But there is a lot of time left. One thing we need to do better is not make dumb mistakes like holding or blocking in the back”, says McLeod. Fellow Captain Senior Stephen Cockey echoed McLeod’s points. In his opinion, “We need to be more disciplined; with such a young team we have too many penalties that either end our drives or extend theirs. But being disciplined isn’t just penalties, its being lined up correctly and doing your job every play because teams capitalize on our mistakes.”  McLeod has already seen improvement in his unit. “At the beginning, the O-Line needed a lot of work but I think we’ve come a long way in that department and made a weakness a strength for us.” Once again Cockey and McLeod were on the same page.  Says Cockey, “The biggest surprise this year has been the offensive line because we came in thinking that would be our weakness with such small, inexperienced players but it seems to be our strength, we can power run on any team.”

The Indians are excelling this year with contributions from upperclassmen but also maintain a large sophomore contingency. The O-Line features three sophomores: Tim Mullane, Pat Flynn (who doubles on D-Line) and Matt Hughes. Jeff Wheeler sees lots of playing time as Wide Out and Corner Back as well as being the teams main Kicker. Matt Lanagan has been starting at Safety and Mike Nimeskern got a start a Defensive End against Scituate. Kenny Janotta has also seen starting time at Linebacker and Brad Rogers was the Tail Back before an ankle injury. Besides the returning three, many other seniors have led the team with an excellent work ethic and production of their own. Miles Lombardo has been starting at Linebacker and has seen time at Fullback. Mike McLeod and Evan Kazmouski have made impacts on the offensive line and defensive front seven. Three returnees to football, Jesse Sellier (FB/LB), Mike Barry (OL/DL), and Shane Fallon (TE) have given the team a huge talent boost. In terms of juniors Joe Byrne has played well at Quarterback and Dimitry Laforest has been dynamic at Running Back. Xaverian transfers Teddy Flaherty and Colin Boutin have had success at Wide Receiver and Defensive Back for the Indians. Cory Devlin has also been a go-to receiver for Byrne.

Following up a team that had a tremendous season,  made the playoffs for the first time in awhile, lost to an eventual state champ and the finished the year 3-0 is a tall task. Yet this years team has the capability to exceed all that. Senior captain Steve Cockey simplified their ambitions into 7 words, “Win the league, then on to Gillette.” Indians have league games remaining against Plymouth South, North Quincy and undefeated Middleboro as well as the Thanksgiving game against Norwell on the docket. Due to new MIAA playoff system (instituted as of last year), Hanover has 3 games that will be playoff games or assigned games. Specific details about the games are TBA but Hanover is in shape for playoff berth right now. Cockey has been incredibly proud of the team up to this point. “Our biggest challenge is we are the smallest, lightest, and youngest team in the league. But we make up for it with speed, intensity, and playing as one team, one heart. I’ve never been on a team that plays with more heart than my current teammates.” says Cockey. The team will play at North Quincy Friday and you won’t want to miss it.