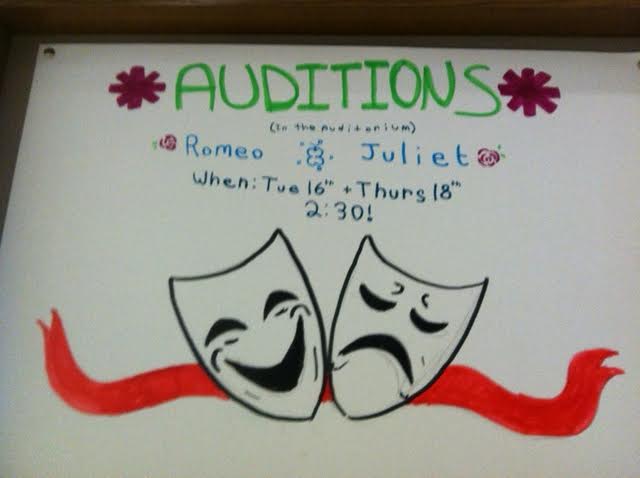 This winter at Hanover High School, we will be lucky enough to showcase a production of Romeo and Juliet. Although we have always had such talented student actors and actresses, this year will be extra special due to our brand new play director and drama teacher, Mr. Jacob Plummer. Being one of Jake’s students myself, I can only imagine how much effort and dedication he is putting into this production to make it the best it can be.

“He’s awesome,” says sophomore Macy Hohenleitner (Lady Montague). “We’re only about two weeks into rehearsal but I couldn’t be happier with how it is going.”

Another actor, Isaac Bickford (Tybalt), reports that Jake has been doing a fantastic job, leaving him with no complaints.

“You have no idea how great Mr. Plummer is,” says Sean Meehan  (ensemble). Sean may be right; although we can truly see for sure how talented and awesome the cast and Mr. Plummer is, when we go to see this seemingly wonderful play.

Romeo and Juliet was a great choice for HHS because everybody reads the play during freshman year. Therefore, everybody knows the story and the characters. This will ensure that the audience will remain hooked during their favorite scenes and parts. This year’s production is much bigger than last year’s, because this year they have an ensemble, which allowed many more students to make the cast list, rather than get cut from the entire production. Some former cast members from last year’s production of “You Can’t Take it With You” are Macy Hohenleitner, Katie Scott, Sean Meehan and Lindsay Glover. All four students say that the cast is much bigger this year, allowing them to make all sorts of new friends, many of them freshmen.

“We have so many wonderful new people this year, and they’re all doing such a great job,” says Katie(Benvolio). Lindsay Glover (Lady Capulet), being a busy senior, agrees with Katie and is elated with how everything is going. She loves being a part of this new experience regardless of how it compares to last year.

On the other hand, there are many freshmen and newcomers to theater who are just as excited about this production. Sophia Ruggiano (ensemble) agreed with the other cast members that everybody fits into their role perfectly, and she also said how great it was to join the  cast in her first year.

David Adams (Romeo) may be a freshman, but he’s sure not brand new to this. David has had minor roles in other plays but has never received a lead role. However, David truly enjoys this production so far, and loves everybody in it.

Mrs. Turner, a freshman English teacher, is beyond excited for the play. “I’m very excited to see Jake’s rendition of it, and I think it is going to be absolutely fabulous.”

(Fun Fact: Mrs. Turner was Jake Plummer’s English teacher for his freshman year and she had taught him the lesson of Romeo and Juliet. According to Turner, he seemed to really enjoy it as a student, and obviously he still enjoys it today.)

Anna Harper(Juliet) believes that everybody was given the part that truly suited them and complimented their personality. “Before this production I have had experience performing in local theaters, but I did not at ALL expect to be receiving the role of Juliet.” says Anna. When asked, Anna and David both agreed that there was no true chemistry behind the scenes of their characters. Oh well!

Cast: “If you were asked to describe this production to somebody who was considering whether or not to see it, what three words would you say to them?”

If you’re as excited for this play as the cast is, stay tuned! It’s coming to the Hanover High School Auditorium this December! Get ready to laugh, cry, smile, frown, and jump out of your seats at this comedic tragedy! Wanna know more? Ask Jacob Plummer or any of the above named cast members! 🙂

One thought on “Romeo and Juliet: Hope you’re as excited as the cast is!”