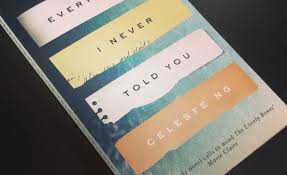 Sixteen-year-old Lydia Lee appears to have it all. She spends hours on the phone each evening, talking to friends. She dives into advanced science classes in the hopes of one day becoming a doctor. She’s polite to her parents, agreeing to their every request without so much as a grumble or complaint.

But, as her family is soon to find out, picture-perfect Lydia is only an illusion. When she goes missing and is found dead, drowned in a local lake, her family struggles to understand what happened. They eventually realize that everything they thought they knew about Lydia was wrong.

In Everything I Never Told You, author Celeste Ng explores what it’s like to be a minority. Lydia’s father was the only Chinese-American student in all of his schools growing up. Her white mother was the sole woman pursuing a medical degree in a time most people thought women went to college only to catch a husband. Their biracial marriage in the 1950s was rare, and in some states, illegal. In the town where Lydia grew up in the 1970s, there is no one outside of her family who looks like her. In all of their experiences, being the minority meant facing taunts, isolation and limited opportunities.

Those limited opportunities haunted Lydia’s parents, who transferred all of their hopes and dreams onto her. Lydia struggled under the weight of their expectations, creating a public face that masked her unhappiness and insecurity. While readers are shown what is going through each character’s mind — during the current investigation into Lydia’s death and in the decades before — it is clear that the family members never shared their experiences and feelings with one another. If they had, maybe they could have helped one another. Or maybe they would have been further weighed down with guilt and shame. We’ll never know. And while readers learn what Lydia was thinking the night she died, her parents and siblings never do. They are left with countless questions that they will never be able to answer.

This is not a happy book, but it is an interesting one. Reading about the experiences of Lydia and her family through their eyes brought home the challenges faced by anyone who feels isolated or unaccepted because of their race, religion or sexual orientation. Some of us will never experience this firsthand. Books like this help us better understand what others may be going through.

Another plus is that the book is written like a mystery, with the opening line telling us “Lydia is dead. But they don’t know this yet.” Pieces of the puzzle are slowly revealed as the author alternates between present time and the past.

I’d recommend this book to anyone who likes realistic fiction about families or mysteries that aren’t necessarily about detectives and crimes. Fans of Ellen Hopkins’ books may also like this. Even though it is not written in verse, it is the same kind of story of dysfunctional families and survivors of tragedy that Hopkins often writes about.