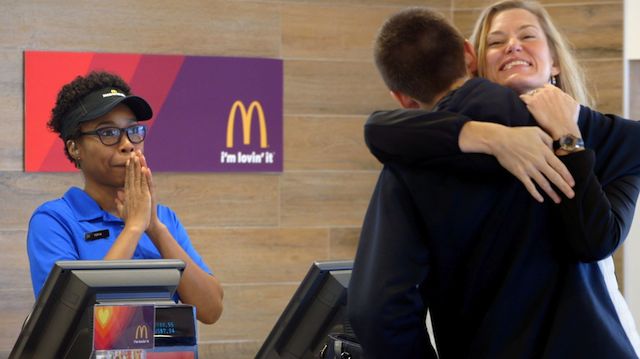 For the first two weeks of February, McDonald’s restaurants ran a marketing campaign that terrified me. “Pay With Lovin’ ” promised that customers would get free food if they agreed to random stunts such as calling their mother, performing a dance or hugging a stranger. McDonald’s thought this would be hip and spontaneous and generate a lot of good neighborly feelings. Instead, social media exploded with complaints that the promotion was intrusive, obnoxious and mortifying.

I couldn’t agree more. When I go to McDonald’s, it’s to get a quarter pounder and fries, not to feel neighborly. I want a friendly, but quick, transaction. I don’t want a life-changing experience. If they asked me to call my mother, I’d either look like a jerk for saying “no thanks” or sound like a downer for telling them she’s passed away. The Grub Street website reported about a customer who called his mom and freaked her out because the call was out of the blue. McDonald’s can’t anticipate people’s issues. What they think might be a fun and harmless task can stress or offend someone. And I feel bad for the employees too, who are forced to dredge up what is most likely false enthusiasm for a job that barely pays the bills. I have to admit that I avoided McDonald’s for the duration of the promotion out of fear of being targeted.

Advertising is all about catching the public’s eye, getting attention and generating excitement — I get that. And while I see through all the manipulation and innuendo of commercials, I still enjoy them and sing the catchiest jingles (“give me a break, give me a break . . .”). But companies presume too much when they try to turn marketing into something touchy-feely. Customers want a product, not an experience. Just give me my food (or my beverage or my whatever) and leave me alone.

Another recent example of invasive and awkward marketing is Starbucks’ efforts to spark conversations between baristas and the customers they serve on the issue of race. Race, religion and politics are things I only talk about with close friends, where I know differing viewpoints will be accepted and relationships won’t be crushed in the debate. I would never talk about these things with a complete stranger for fear of offending the person, or getting trapped in a heated exchange with someone who doesn’t know how to agree to disagree. I can’t think of a topic more potentially incendiary than race. Yes, this country needs to open a better dialogue about discrimination and social ills, but that conversation doesn’t need to take place between servers and patrons during the brief, often rushed purchase of a coffee. I would argue that doing so is not only potentially uncomfortable for everyone involved, but also irresponsible. Is Starbucks giving its employees specific talking points to follow in these discussions, or giving them free reign? I’m not sure which would be worse.

I’m sure in both cases, the companies were trying to bolster their image as compassionate, socially-conscious businesses concerned with more than making a profit. But I think these efforts back-fired. Rather than encourage people to feel good about the company, these campaigns turned people off. If McDonalds, Starbucks and other companies  want to help people, they should work with reputable charity organizations and put their company’s wealth behind a good cause. Don’t hide behind a marketing gimmick — an obnoxious one, at that — and pretend it’s a way of doing good.