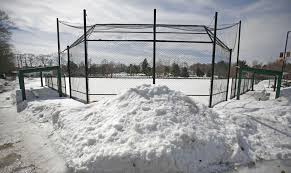 The incredible amount of snow this winter has been a real thorn in the side to spring sports everywhere. Some of the problems are fading but the damage has been done. The MIAA has pushed back the end of the regular season by a week for every sport except Track and Field, which only got pushed back to May 28th. Many programs have felt the struggle along with Hanover.  But at HHS, things are finally starting to get underway.

The boys lacrosse team spent much of its first week offsite at an indoor turf facility. They got into action this weekend with a 5-4 win north of Boston at Hamilton-Wenham. They followed it up with their first home game Monday afternoon with the turf finally clear, knocking off Hull. Last week, three Hanover teams went on the road to start their seasons as well. Boys and Girls tennis, who usually play opposite of each other, both went to Duxbury where they came up short. Girls lacrosse went to Quincy and got a W on their record. Five tennis courts are cleared as well as the turf so all of those teams should start to have home contests soon.

Track and Field has been pretty limited thus far by the snow. The team has been doing most of its stuff out in front of the school. They have already had one meet postponed. They haven’t been able to practice their field events and haven’t done much of anything on the actual track. Hopefully, they won’t be too rusty when they finally  start.

As for Baseball and Softball, a brand new indoor batting cage donated by HYAA has helped but both teams spent have spent a lot of time cooped up in the gym so far. Just recently, both teams have started to use portions of the turf and some of the front fields to get some work in. Both teams had all their games last week postponed. Softball travels to Plymouth North Wednesday (4/8) for its first game and baseball will take the diamond for games next week.

Rugby has been inside the middle school gym for the most part. With the turf now open, they will hopefully get outside some more. However, they operate on a very different schedule than the rest of spring sports.

The winter cleaning has been pretty tough, but Mr. Hutchison has done an excellent job getting things ready. He cleared all five of the open tennis courts almost entirely by himself. He had quite an innovative method going with the turf, where the use of many huge tarps laying face down has led to more melting and opened up patches until it has reached a point where the entire playing field is clear. Things will get going full throttle around here soon and hopefully the spring weather will cooperate so that the rest of the season can go on without a hitch.