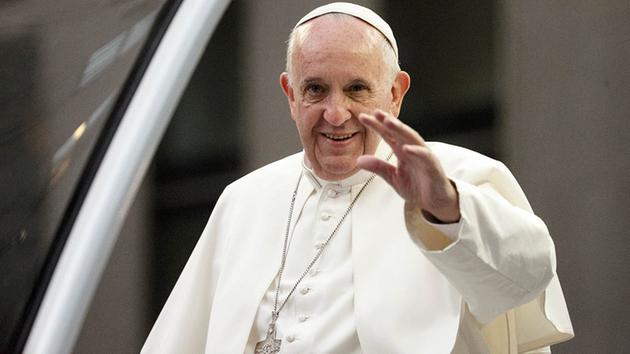 Last week, Pope Francis crossed the pond for an abridged tour of the States and caused quite the commotion. Through social media and word-of-mouth, I learned that the arrival of the leader of the Roman Catholic Church sparked the creation of its own website (popefrancisvisit.com, in case you were seeking another way to procrastinate), a new drink flavor at numerous coffee shops (wondering where that pumpkin spice latte you love went? You might want to try asking for a Pope-kin spice flavor next time), and even its own hashtag (#lovelikefrancis . . . and yes, you can buy sweatshirts bearing this message!). Ok, so it sounds like Pope Francis has definitely made a splash on the Internet, no small feat considering he doesn’t seem like the type to be a computer nerd. But what did one of our world’s most influential leaders actually do in America?!

Well, Pope Francis’ visit began in Washington D.C. last Wednesday, where he was formally greeted by President Obama. Just a few hours later, he was parading down the National Mall to the delight of millions and held a midday prayer at St. Matthew’s Cathedral. The next day, the Pope spoke to the Senate and House of Representatives, made a brief appearance outside the Capitol (the perfect opportunity to take a selfie with the Pope in the background and put that hashtag to good use!), and visited St. Patrick’s Church where he did, you know, Pope things.

He left that night for his first ever trip to the Big Apple! The Pope arrived and hit the ground running: he spoke at the United Nations, blessed the 9/11 memorial, and visited underprivileged children at public schools in Harlem. After a papal motorcade through Central Park, Pope Francis conducted a sold-out mass at Madison Square Garden. Tickets to the event were supposed to be free, distributed to churches in the area, but some scalpers got upwards of $1,500 a seat.

The final stop on the Pope’s agenda was Philadelphia. Just an hour and a half after arriving, he gave a mass at the Cathedral Basilica of Saints Peter and Paul that attracted thousands; there’s no time to stop for a Philly cheese sub when you’re the head of a religion, I guess! He also made an appearance at the Independence Mall and held a prayer vigil later that night with the World Meeting of Families. Pope Francis departed for Rome at 8:00 pm on Sunday, September 27th after five days of spreading his message of hope and faith.

The grueling schedule probably left the 78-year-old exhausted, but on his first visit to America the Pope touched millions of lives. To be honest, I’m disappointed he didn’t make it closer to Hanover. I think it’s pretty cool that Pope Francis had showers installed at the Vatican for the homeless to use whenever they want, and auctioned his custom Harley Davidson for almost $350,000. All of the profits went to a soup kitchen in Rome and will fill countless hungry stomachs over the next few years. It seems like the Pope doesn’t just talk the talk, he is dedicated to walking that spiritual walk.