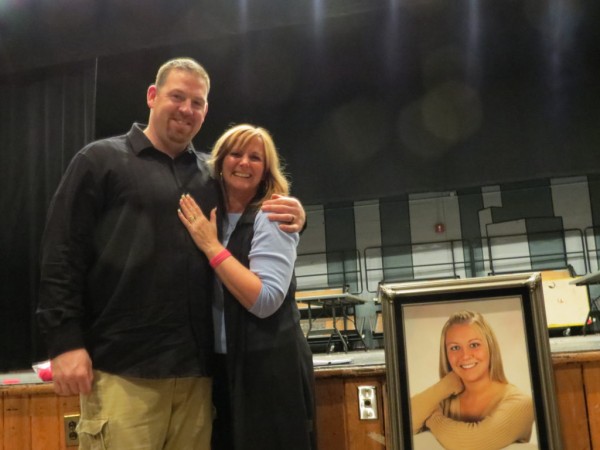 When Kathi Sullivan addressed Hanover High School students last week on the dangers of alcohol, she was speaking from heartbreaking personal experience. Mrs. Sullivan’s daughter Taylor Meyer died in 2008 at just 17 years old because of excessive underage drinking that clouded her judgement one night. Mrs. Sullivan described how Taylor had been drinking with friends, got into an argument while walking in the dark to a campfire in the woods, and then wandered off on her own. Her friends did not follow her, and a few days later, Taylor was found to have drowned in two feet of water nearby. Mrs. Sullivan described how the experience impelled her to become a public speaker and advocate for awareness about alcohol and being a responsible friend and parent. Since her daughter’s death, she has talked at many schools across Massachusetts and influenced her audience in hundreds of ways. Not only has Mrs. Sullivan received emails and personal remarks from students and parents about how helpful her message has been, she also met her current husband at one of her talks. Today, Mrs. Sullivan finds purpose in sharing what she has termed “Taylor’s Message” in the hope of preventing more teenagers and families from suffering because of underaged binge drinking.

Mrs. Sullivan’s speech was eye-opening and startling, bringing many listeners in the auditorium to tears as they grasped the reality of how one of their friends could share Taylor’s fate if they made poor decisions with alcohol. The trauma and sadness that Mrs. Sullivan and her family underwent after Taylor’s death was clear in the slideshow she showed as she spoke. One of the most incredible parts of the presentation was Mrs. Sullivan’s ability to talk openly and publicly about her daughter’s death. After her daughter died, Mrs. Sullivan had the option to either sink into sadness or to stand up again and find purpose in her daughter’s short life. Mrs. Sullivan chose the latter and today is enthusiastic and friendly to as many students as possible. She holds onto Taylor’s memory, wearing a tattoo of Taylor on her arm and speaking to her in the car after her talks. She also keeps the faith that her daughter’s story can help and protect others as she continues to speak to students and their parents every year.

At the end of her presentation, Mrs. Sullivan let each student take a bracelet in memory of her daughter as a reminder that they have a purpose and must make good decisions. That night, Mrs. Sullivan spoke to parents about her daughter’s story. Though Taylor’s life was far too short and ended in tragedy, it continues to hold meaning for her family, her friends, and the thousands that her mother has inspired by sharing “Taylor’s Message.”