As a librarian, I spend most of my free time reading. But I’m no saint – or snob; I devote my fair share of hours to the TV as well. I can’t say that 2017 was a particularly great year for the small screen, but I will argue that the rise of original shows from nontraditional channels (Netflix, Hulu, Amazon) has led to more diverse, edgy and interesting choices than we’ve had in the past.  Below is a compilation of the best shows I discovered in 2017, the ones I’ve finally given up on, and ones I can’t wait to see in 2018. 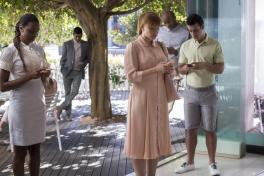 Black Mirror: This British anthology series has been called the Twilight Zone for the new millennium.  Released in the UK in 2011, this quirky, sometimes disturbing show about the potential pitfalls of technology debuted on Netflix in 2016. I finally began watching it recently and find each episode surprising and often a bit terrifying. Sometimes the crazy ways they imagine technology being used don’t seem so far from the current reality —  counting “likes” to determine if you qualify for a job such as in Nosedive, or creating a clone of a loved one from a social media profile as in Be Right Back. Because it’s an anthology, you can watch the episodes in any order, one at a time or hours in a row.  If you haven’t watched this yet, check it out.

Dark: Another great Netflix release, this German science fiction series has been compared to Stranger Things, but is closer to Lost in my opinion.  Set in the forested town of Winden, the action centers on the mysterious disappearances of children every 33 years.  There is a creepy series of caves, an ominous nuclear power plant and some very dysfunctional families. Throw in some time travel and the show becomes a complicated puzzle you’re desperate to figure out. The first few episodes may be confusing as you try to keep track of all the characters, but it’s worth sticking with it. I ended up binge-watching the last four and now can’t wait for season 2. You can watch the show in German with English subtitles or dubbed in English.

Black-ish: Some family sitcoms get old fast, but this one on ABC has stayed original, in part because it hasn’t been afraid to mix humor with brutal honesty. Some episodes are used to highlight issues of race, such as season 4’s musical Juneteenth, when father Dre protests a school play about Columbus that whitewashes history (The one-minute video about slavery modeled on Schoolhouse Rock should be shown in every high school classroom). Others are about family issues everyone can relate to, such as the season 3 premiere VIP, when the family heads to Disney World.

Alias Grace: Based on the novel by Margaret Atwood, which fictionalizes a 19th century true crime, this Netflix original focuses on a poor immigrant girl charged with a ghastly murder. The six-episode series explores whether mild-mannered Grace Marks was insane when the crime happened, or knew what she was doing and was driven by the injustices showered upon her gender and class. Most of the show plays like a typical crime drama, but the final episode turned everything I thought on its head.

The Vietnam War: Ken Burns’  PBS documentary takes 17 hours to watch, but I think it should be required viewing for every American. I learned so much: the tragic French occupation of Vietnam whose mistakes our own forces repeated, the U.S. government’s lies and missteps that brought us into war, the physical and psychological toll the conflict inflicted on both sides, the violent and divisive protests at home. I recognized so many connections between then and now, as our deeply divided nation struggles over its identity and priorities.

American Horror Story: I’ve watched most seasons of this F/X horror show, enjoying (while cringing at) Murder House, Asylum, Freak Show and Roanoke. But this year’s Cult turned me off. It wasn’t the gore, although there was a lot of it. It wasn’t the actors, who continue to bring to life their new characters each season. It was the focus on politics, and a leader who sows fear and benefits from a panicked, irrational populace. It struck too close to home, given what’s happening in our country, and I couldn’t finish the season.

Walking Dead: I’ve watched from the beginning, forgiving the show’s many missteps (Glenn’s miraculous survival by dumpster, Carol losing her nerve), but couldn’t continue after the season premiere. Negan was a great villain, but the conflict with him has dragged on too long. When Maggie and company wasted time talking to Negan and his cronies in the first episodes – when they had clear shots at them – I gave up. I’ve since heard there’s been a controversial death this season that has riled up fans, but I’m not curious enough to spend the time catching up.

Alienist: This historical crime drama, which premiered on TNT in January, looks intriguing. A journalist, a prickly psychiatrist and a team of investigators work together to solve a series of murders in 1896 New  York City. This unusual team pioneers true-life innovations in fingerprinting, forensic science and criminal profiling over a 10-episode series.

Castle Rock: Stephen King created this fictional town as the setting for many of his stories, and this anthology will bring together some of his most terrifying characters. You’ll find Pennywise from It, the mad dog from Cujo and more in this series created by J.J. Abrams. Since it runs on Hulu, I’ll have to borrow someone’s password to see it.

Roseanne reboot: Of all the sitcoms I watched growing up in the

’80s, I could best relate to the working class Conner family struggling to pay the bills and get along with each other. And while I’m getting tired of endless remakes and reboots and find many of them pointless, I will give this one a shot. I’m curious to see what the characters will be up to this far into the future and how they’ll be impacted by current events. This premieres on ABC in March.

Chi: If I had Showtime, I’d watch this ensemble set in the gritty, sometimes violent South Side of Chicago. The premiere in early January focused on a young boy who discovers a body, and the ripple effect it has on his community. I’m drawn toward stories of young people who battle poverty, violence and other disadvantages as they try to forge their path.