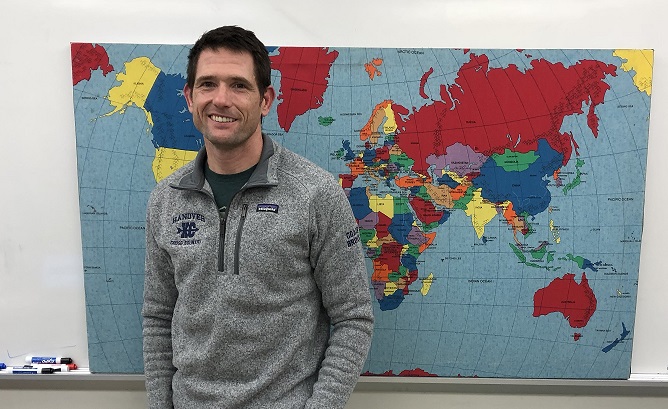 Mr. Brown teaches World History and Global Studies to Juniors and Seniors at Hanover High School. While teaching, Mr. Brown uses his charisma to combine learning and fun so as to captivate his students and make them excited to learn. This also makes his class one of the most enjoyable to be in, as his easy-going and fun personality can relieve the stress of difficult assignments. This has made him one of the most well liked and renown teachers at HHS.

After graduating from Rockland High School in 1991, Mr. Brown attended Norwich University. Mr. Brown knew he had a passion for teaching, so he majored in Elementary Education because of  his own fond memories of his kindergarten experiences. After college, he enlisted in the United States Army, an experience that would change his life and career path for years to come. Life in the army was different from life at home for Mr. Brown. Instead of helping his dad paint houses, he went into combat, and was forced to overcome his fear of heights many times when he was required to deploy mid-air from planes. While military life was difficult, Mr. Brown enjoyed the opportunity to serve as a mentor to new recruits. It was this experience that later convinced him to choose to teach high school  instead of elementary school. After returning home from the military, Mr. Brown became a wrestling coach for Rockland High School, and later taught fitness classes at Park and Rec. He became a teacher at Hanover High School in 2002.

Outside of school, Mr. Brown is a devoted father who cares for his family and enjoys attending his three kids’ school- and sports-related events.  He has a passion for exercise and fitness, renting out a building in Rockland to teach exercise classes and to train athletes. He serves as an instructor, as well as a student, at a Brazilian jiu jitsu gym in Weymouth. Mr. Brown enjoys learning under his jiu jitsu teacher Dedeco, as it gives him insight on how it feels for an athlete to practice under the mentorship of a coach. He then applies this knowledge in his own coaching. He also adheres to a 10:00 pm bedtime, so that he can get enough sleep every single night.

Mr. Brown has coached a variety of teams during his long and successful career at Hanover High School, including Lacrosse and Wrestling in his early years, and Track and Field and Cross Country today. As a coach, Mr. Brown most enjoys seeing his athletes improve each year, and has made it his mission to help every single one of his athletes achieve their personal best. During his tenure as a wrestling coach, Mr. Brown coached 10 wrestling state champions, 20 sectional champions, and one New England champion. Mr. Brown takes pride in the fact that two of his athletes have recently achieved the honor of League MVP, one for Cross Country and the other for Track and Field. Mr. Brown finds these many achievements astounding, and he is proud of his student-athletes’ hard work and dedication.

It’s evident that Mr. Brown is a hardworking and passionate teacher and coach who will do anything in his power to see his students and athletes succeed and achieve their best.