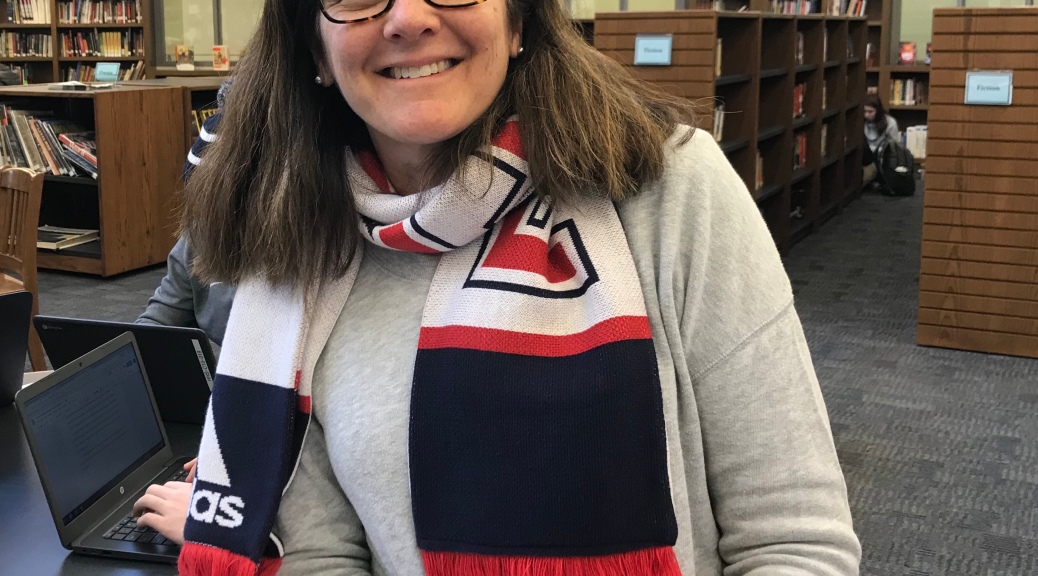 Mrs. McCusker’s love for books goes beyond simply reading in her free time. When she was a student in high school, she had her own personal “library” and would lend books to her friends! She went to Apponequet High School in Lakeville, a place she says has nothing but “farmers and cranberry bogs.” She spent most of her time in high school playing field hockey, basketball and softball.

Mrs. McCusker didn’t always want to be a teacher. She originally thought she wanted to do something directly related to books, majoring in business at Syracuse University. She worked in retail after graduation and eventually went back to school to get her Master’s degree in history and library science. After working as a librarian in Newton, she had a connection in Hanover and became the librarian for Center/Sylvester Elementary School. She was the Hanover High School librarian for many years, and then became a history teacher. Currently, she teaches junior World History and senior Humanities.

Along with her love for books, Mrs. McCusker loves history. She enjoys reading and speaking about it, and wakes up every day excited to share her passion with her students. Instead of focusing on facts and figures alone, she would rather make connections through history and create an environment in her classroom where students feel like they can “communicate and share ideas (and) voice their opinions.” She wants her students to leave her class prepared for college, skilled in taking notes, writing, synthesizing information and identifying main ideas.

Mrs. McCusker is married to a Curry College professor and has two children. She spends a lot of her free time on the sidelines watching her children play sports and she loves it, especially soccer. Her favorite television show is called “Men in Blazers,” a British broadcast of soccer highlights. She loves to travel with her family and usually starts her summers off that way. Both she and her husband don’t “do well” with summer, she said; they like having a schedule. After they travel, visit with family, and make a few trips to the Museum of Fine Arts, they get pretty bored. Mrs. McCusker tries to take a new class each summer as she believes it’s important to keep learning as you are teaching. Last year, she studied Islamic Art, and the year before, it was Colonial Africa. She takes pride in knowing the World History classes she teaches today touch on a wide range of places and not just the European and American history she learned in high school.

One of her favorite days of the year is September 1st, right before school begins. She thinks it’s sort of like a “second New Year’s Day,” another opportunity for a fresh start; most jobs don’t come with this luxury. Over the years, she’s found inspiration from her close friend and colleague, retired English teacher Mr. Hopkins, admiring the way he always sees the positive in everyone and believes every day is a new day. Mr. Hopkins would never say a bad thing about anybody, Mrs. McCusker said, and that is how she wants to live her life. She also pointed out that even though he taught a lot of the same material for over 30 years, he would never complain about reteaching the same book, instead, he saw the best in it and found something new about it every time.

One thought on “Mrs. McCusker: Reading is Key to her History”