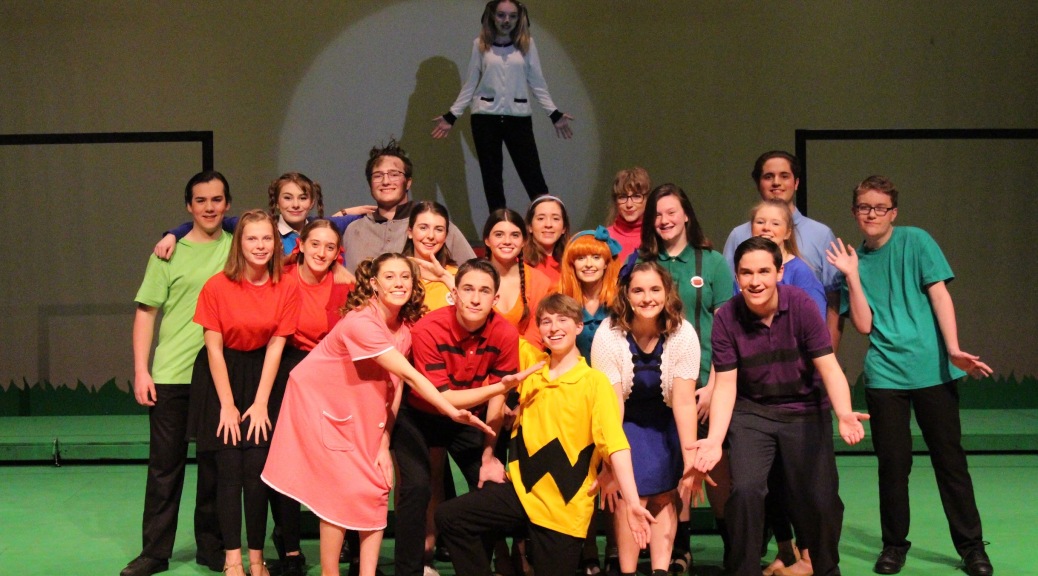 You’re a Good Man, Charlie Brown was a smash hit this past week! The cast, crew, pit orchestra, and production staff put together an amazing performance that truly captivated the audience, including myself.

I saw the show twice, once on opening night with the wonderful cast of Kyle Knight as Charlie Brown, Michelle Sylvester as Sally, Emma Gannon as Lucy, Ben Manning as Schroeder, Christopher Manning as Linus, and Julia Cross as Snoopy. I just had to go back for a second time and see the understudy cast which starred Kat Sheridan as Sally, Elise Falvey as Lucy, and Erin Foley as Snoopy. Both shows featured a colorful, cheery ensemble which included Brendan Connolly, Rosie Danehy, Kyle Donnelly, Norah Flanders, Callia Gilligan, Jordan Kennedy, Daniel Manning, Emma Massey, Anthony Pierotti, Harper Seelye, and Erin Shea.

This show delivered meaningful messages to the audience about growing up, feeling alone, and finding happiness. These messages were conveyed through the lighthearted comedy and youthful innocence that is classic for any sort of Charlie Brown production – something the cast pulled off beautifully. Each musical number was energetic and engaging, not to mention several were completely student-choreographed! The Indian’s own Callia Galligan was dance captain for the production. Callia said she has always wanted to do something like this but has never had the opportunity and this was definitely a highlight of the musical this year for her. It wasn’t too much of a challenge to translate the music into dance, she said, but it “took a lot of thought to determine what steps would translate the energy or theme of a certain song.”

The cast’s ability to disguise themselves as younger kids who are just growing up was quite impressive. The border between being a kid and becoming mature was shown throughout the show. It was shown in Lucy’s desire to be queen and her eventual appreciation for Charlie Brown being himself. It was shown in Sally’s pursuit of adventure but also her determination. This time of growth was also shown in Linus’ need to be accompanied by his blanket in My Blanket and Me and his almost comical intelligence. I was blown away by Snoopy’s portrayal both times that I saw the show. Both Julia and Erin brought Snoopy to life as a lovable and witty character. Specifically in the number Suppertime, which was student-choreographed, It was hard to keep myself from not giving a standing ovation in the middle of the show. Although I have no idea what dogs think, somehow this felt right!

Charlie Brown’s character highlights the innocence and fear that comes with feeling alone, having a crush, and learning to appreciate who you are. Kyle Knight, who played Charlie Brown, said it was an amazing experience!  Kyle has been doing musicals since his sophomore year and playing the title role this year was, he said, “both a big responsibility and something I was very excited to do!” Kyle was happy to be able to perform with some of his really close friends in the cast and crew. When I asked him if he felt for Charlie Brown or could relate to the character he was playing, he said, “How could you not? He’s a kid who just can’t get a break and wants the best for himself but can’t seem to figure it out and I’m sure everyone can relate to that at the very least a little bit.” \

The Pit Orchestra made the musical that much more enjoyable and brought outstanding emotion to the show. Senior Una Davenport enjoyed “making new friends, memories, and getting to play fun music” in the pit the past three years. The last three musicals at HHS have been different each year and Una was glad that You’re a Good Man, Charlie Brown had, “more room for comedic expression, which was fun to explore.” Una appreciated the constant encouragement from Mr. Wade and Mr. Harden and how much time they devoted over the short period they have to prepare for the musical each year. This year, Una played both electric and upright bass, which she hasn’t played in the pit before. “Overall, the job of the pit is to make the cast sound as good as we can and their phenomenal talent combined with the direction from Mr. Fahey made it effortless,” Una said. Now that the musical is over, it is bittersweet, she said, adding that she is grateful for the memories she made and the new meaning to the word Happiness she discovered.

My favorite number was certainly Happiness and the powerful lyrics “Happiness is anyone and anything at all that’s loved by you.” I also loved when the cast came together in both Beethoven Day and The Book Report. Make sure to follow @hanoverhighdramaclub on Instagram to stay up to date with the drama club. I am so glad that I was able to witness such greatness put on by our talented peers this past week!