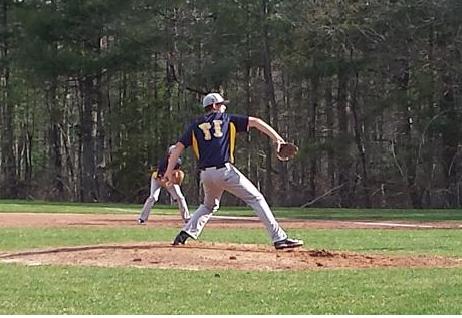 The Hanover Indians baseball team has started off to a pedestrian first half and they know it. It took the team longer than usual to get through 10 games due to four rain postponements against Norwell, Pembroke, Quincy, and Middleboro. The second half of the season will be very compacted with three to four games a week and will require great stamina from the boys. If they play in a way similar to the first half, they very well may miss out on a coveted MIAA postseason birth.

The Indians started out rough with a blowout loss to Norwell, followed by a disappointing 8-4 loss to a mediocre Scituate team. The subpar play was picked up slightly in a 2-0 victory over North Quincy with Ryan Kelleher getting the win and Mike McLeod’s surprise success at the plate. Hanover continued to struggle against Whitman-Hanson through 6 innings, but a change was sparked with a 4-run rally to come within one before the umps took the tie away from them.

Heading into vacation week, Hanover lost freshman Matt Lanagan and junior Mike McLeod to travel, but their absence opened it up for the emergence of sophomore Sean Cornell. Hanover hit Rockland all over the place, taking a 7-0 lead before Rockland made a comeback and Troy Bridson had to come in for the save. Thursday of vacation week marked a doubleheader against a highly touted and undefeated Abington team. The first game, Kelleher pitched a complete game gem and Hanover hit Abington hard for a 5-0 victory. In the second game, Dave Griffin went out and topped Kelleher’s performance while getting an early 2-RBI hit from Kelleher to back him up. The game would end 2-0. Hanover then got beaten 4-1 by a highly ranked Silver Lake team. Matt Sointu threw his best but Hanover couldn’t get its bats moving til the end.  In the next outing, Hanover was tied with a good Duxbury squad 1-1 through 5 innings but a few mistakes in the 6th lead to a domino effect and Duxbury won with ease.

Despite the inconsistency, some Hanover players still put up great numbers. Pitchers Sointu and Kelleher are pitching great, each with a 1.94 ERA. Kelleher has also been hot at the plate, leading Hanover with a .345 batting average, followed by junior Justin Paskell at a .344 clip. In limited action, Phil Levangie is hitting .294 and just getting started.

Despite their ups and downs, Hanover is ready to get rolling in the second half. The second half of the season will be a grind for the Indians but that doesn’t mean they can’t be successful. Says senior captain Kelleher, “We need to have more timely hitting if we want to start winning games. Our pitching has been strong but we need to start scoring more runs.”

Kelleher pointed to the performance of Sointu, who has a 1.94 ERA but is 0-3 due a lack of run support, and team batting average of .210 when he is pitching.

Kelleher is very optimistic about the second half. “I’m looking forward to getting the bats going. As soon as we start to hit we are capable of going on a 5-game win streak. Tourney Time is the best time of year and hopefully we can make a run this year after an extra innings loss to Apponequet last season.”

Hanover gets back at it May 5th in Patriot League play.