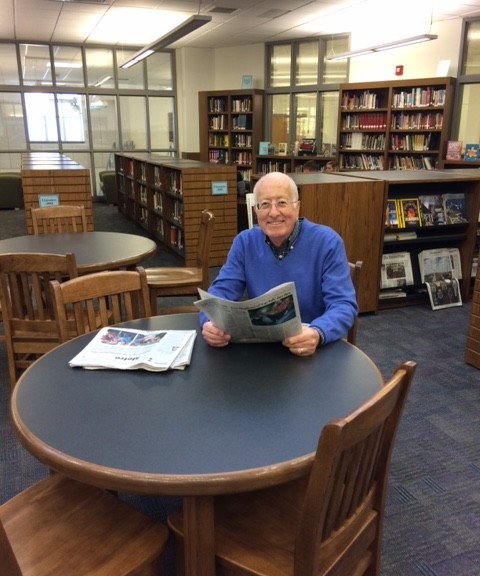 While sitting in the library one day, working less than diligently on my VHS work, I saw Mr. Ralph Miller walk into the library as he does every day during his free period to read the Boston Globe.  I was anxious for an interview with the only man who has taught at Hanover High since the opening of the old high school in 1958. Teacher interviews are a common occurrence for The HHS Indian; however, I had the opportunity to speak with the man who has had the most teaching and life experience  of any our past interviewees.

Sadly, many of us lack the opportunity to get to know Mr. Miller. Substitute teachers and their temporary students have little time to sit down for a conversation, like I had the privilege of doing last week.  I discovered there is so much more to this man, whom I previously envisaged as a the man who calls every student “princess.”  I began by asking him about his teaching career.  Turns our that Mr. Miller was a biology teacher before he retired and became a substitute.  I asked him what he felt was the biggest classroom change from the glory days of the old school to the new school.  Miller replied by saying, “The focus is more on the students.  The students have more power in the classroom than they used to.” I asked if there were any particular students who stood out over the years as being exceptionally intelligent or rambunctious.  He shook his head and gave a laugh, “I don’t even know what your name is.” When I asked what he felt was the best quality for a student to have, he replied “I like the students who pay attention.”

It goes without saying that Mr. Miller is an experienced teacher, but as I began to ask him a few personal questions, I realized there was a depth in the man as thick as the books he reads during class. Prior to teaching, he attended Boston University and spent some time in the military.  Also, Mr. Miller is a world traveler.  In fact, he is so well versed in travel that he speaks of his experiences nonchalantly, as if his adventures were as common as a trip to Lake Winnipesaukee.  He shared with me a few of his travel stories, including his walk along the Great Wall of China and a rather unpleasant passage across the Strait of Gibraltar.  His favorite destinations have been Paris and London because “they are cities that you can get lost in and explore.”

I heard from his colleague, Mr. Hopkins, that Mr. Miller is quite the romantic.  I decided to test this theory by asking Mr. Miller about his wife.  “How long have you been married?” I asked.  A smile crept across his face, “Do you really want to know?”  “Yes, please”.  The smile stayed as he answered:  “50 years.”  I paused in amazement.  When I asked him if there was any secret to being married that long, he stopped and thought for a moment.  Miller looked up at me with glowing eyes, “No, no secret.  She’s just . . .  the one.” He said it as though the term “the one” were brand-new and created only to describe his precious wife.  “She must be lovely,” I remarked.  To this, he gave a thoughtful nod.  I also discovered that Mr. Miller has three children and one granddaughter.  Through questioning him I learned that this man has as much love for the rest of his family as he does for his wife.  Describing his granddaughter Anna, he said,  “She’s so sweet, beautiful, and so outspoken.”  He then added, “Such a princess.”

This led me to ask my final question.  “Mr. Miller, why do you call all students princess?”  With his thick Boston accent he replied, “Because they are.”

5 thoughts on “Mr. Miller: The Man, The Myth, The Legend”