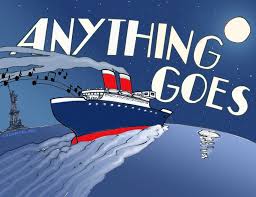 “How can they get on without knowing?”

Recited by Macy Hohenleitner, Class of 2017, this line came from a homeless character in the February 26th production of Tracks. The most recent performance by Hanover High’s drama department was performed at the Massachusetts Educational Theater Guild Festival and was, to everyone who saw it, a rousing success.

This May, we will see the newest show from the theater ensemble, the musical Anything Goes. With music and lyrics written by Cole Porter in the 1930s, the madcap story follows Billy Crocker, who sneaks about a transatlantic oceanliner in hopes of winning the heart of heiress Hope Harcourt. Unfortunately, Hope is already engaged. Nightclub singer Reno Sweeney and Public Enemy #13 Moonface Martin aid Billy in his quest to win Hope. The musical introduced such songs as “Anything Goes”, “You’re the Top”, and “I Get a Kick Out of You.”

Last March, Hanover saw perhaps one of the greatest, most talented casts perform the classic production of The Sound of Music. The cast included Class of 2015 members Zack McArthur and Hayley Ardizzoni as leads, whose talent and vocals added to the production as a whole. Students raved that The Sound of Music was amazing; from being involved backstage, I can attest to this.

Many students who were involved in the groundbreaking musical from last year will return for Anything Goes. Katie Scott, Macy Hohenleitner, Maddy Carroll, Brennan Taylor, Mikenzie Matheson, Hannah Kirby, and others all will return to maintain the newly established, fresh reputation of the Hanover drama department.

“Anything Goes is expected to be of better caliber than The Sound of Music,” noted Mike Meads, Class of 2016, who has worked as a stage manager for Hanover Drama this year. “We’re adding new things that will enhance the performance, like tap dance.”

Band director Mr. Matt Harden will be overseeing the production. Mrs. Elaine Bossong Thompson, geometry teacher at Hanover High and adviser to the school’s new dance  team, will be assisting the cast in choreography.