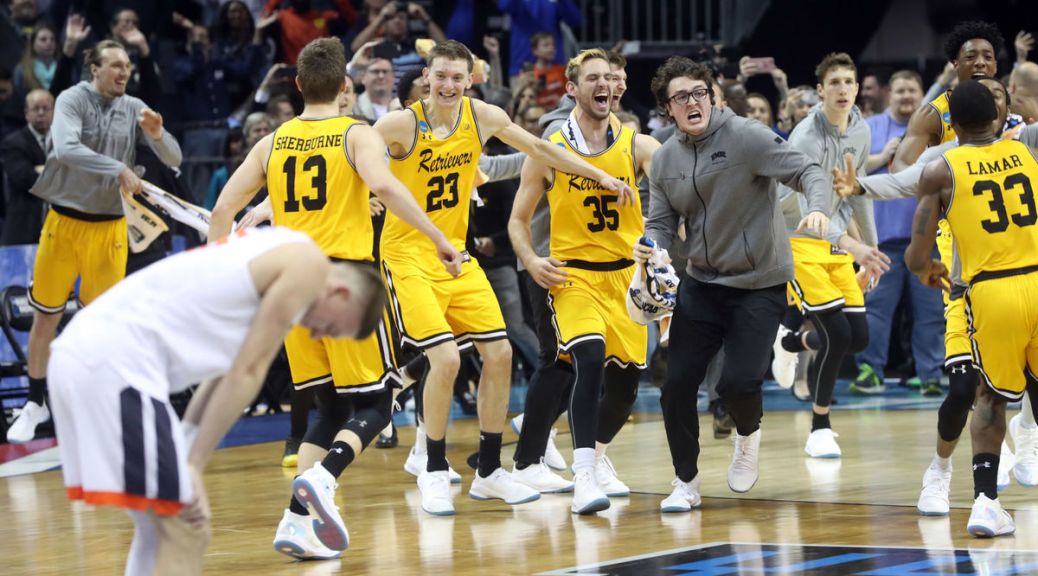 College basketball’s March Madness kicked off this past weekend and it did not disappoint — except, perhaps, when it came to your bracket. Going into the first weekend, there were more than 70 million brackets filled out around the world, and after just day two, none of those remained perfect. The teams picked most often to win the championship were Virginia, Villanova, Kansas, and Duke. The first weekend proved to be a historic one.

For the first time in NCAA history, a number 16 team defeated a number 1 ranked team. UMBC defeated Virginia, the favorite to win the whole thing, in the first round. Going into this game, 16th seeds were 0-135 against the top seed. UMBC not only defeated Virginia but absolutely obliterated them, 74-54. Although there weren’t any other upsets as shocking as this one, there were a total of 15 upsets in the first round. Buffalo, seeded 13th, destroyed a popular pick for the championship, 4th seed Arizona, 89-68.  Loyola-Chicago, seeded 11th, topped 6th-seeded Miami on a buzzer-beater 3-pointer by Donte Ingram.  Ranked 13, Marshall topped 4th-seeded Wichita St. led by 27 points from their star sharpshooting guard John Elmore. Syracuse’s 11th-seeded zone defense dominated  in a 57-52 victory over 6th-seeded TCU.

The second round included several exciting games: yet another thriller for Loyola-Chicago, a historic comeback from Nevada, an unbelievable shot from Michigan, a blowout by Texas A&M, another top seed biting the dust and a defensive showdown by Syracuse.

In the South region, Loyola-Chicago went on to defeat the 3rd-seeded Tennessee on yet another last-second buzzer-beater, this time by Clayton Custer. With their first two games coming down to the last second, their matchup in the Sweet Sixteen is sure to be one to watch. Loyola-Chicago will take on 7th-seeded Nevada, another Cinderella story. Nevada defeated the 2nd-seeded Cincinnati after trailing by 22 points with only 10 minutes remaining in the game. The South region has now lost its top four seeds: Virginia, Cincinnati, Tennessee, and Arizona. Loyola-Chicago and Nevada.

The West region was full of action during the round of 32. The 3rd-seeded Michigan was able to keep its dreams alive thanks to a last second heave by unlikely hero Jordan Poole. The 7th-seeded Texas A&M destroyed number 2 seed North Carolina, 86-65, carried by their big men Tyler Davis and Robert Williams. Xavier, the 1st seed in the West, lost 75-70 to the 9th-seeded Florida State. The West has already lost its top two seeds as the madness continues.

The East region was calm during the second round as all the favorites survived to advance to the Sweet Sixteen. The same is true for the Midwest, aside from the Cinderella story  of Syracuse, who defeated a powerful Michigan State team, 56-53.

Some headline match ups of the Sweet Sixteen include Villanova versus West Virginia, both yet to be challenged in March, and Loyola-Chicago against Nevada. This March truly has been nothing but madness as more and more unlikely teams continue to survive and advance.

One thought on “The Madness is Back”