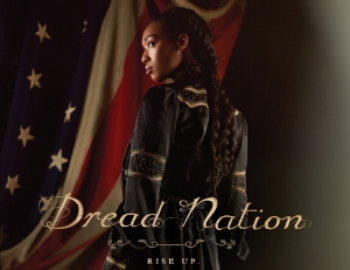 Zombie plagues have been the rage in TV, movies and books for years. But setting a Zombie plague during the American Civil War? Now that’s something new.

Justina Ireland turns historical fiction on its head with her two-book series Dread Nation. Titled Rise Up and Deathless Divide, the books explore the racial, social and economic impacts of the ‘War Between the States’ and give new meaning to the term Reconstruction, the period of rebuilding and reunifying society after the war’s end. While no book involving zombies can be historically accurate, the stories build on the real people, events and issues of the time to highlight the brutality of slavery and the inequality that remained as the country moved forward – and westward. As the author explains in her notes, she wrote the books to give voice to characters often left out of history.

The books focus on Jane and Katherine, two Black teens taken from their homes after the dead begin to rise during the Battle of Gettysburg. Like other children of their race, they are deemed inferior – and therefore expendable – and sent to boarding schools that train them to protect rich whites from the undead. (These boarding schools resembled the facilities that Native Americans were sent to in the 1800s, when the U.S. government stole their land and forced their assimilation) The girls excel in their training, but before they can be assigned to protect society ladies, they uncover a sinister plot to build a “utopia” to replace the Eastern cities falling to the zombie plague. This new community is founded on the principles of Jim Crow, the discriminatory laws that rose to continue the oppression of Blacks after slavery was abolished. This means Blacks have no rights and are assigned the most dangerous jobs and the worst living conditions.

Tough-hearted and quick to temper, Jane resolves not just to survive, but to find an escape. Light-skinned and able to pass as White, Katherine plays along with the cruel society in order to help Jane’s plan to secure their freedom. There are tense battles, sorrowful deaths, cruel betrayals, heart-wrenching romances and epic friendships. And that’s just in book one. In the second book, the main characters venture west. Alive but forever changed, one seeks safety and peace while the other pursues vengeance.

The books are a unique way to explore the issues of American history including slavery and Reconstruction, the government’s treatment of Native Americans, the cultural clashes that came with waves of immigration, expansion of the western frontier, and the search for the “American dream.” But if you aren’t really interested in the history, the books aren’t slowed down by it. The series provides enough action and adventure for any reader.