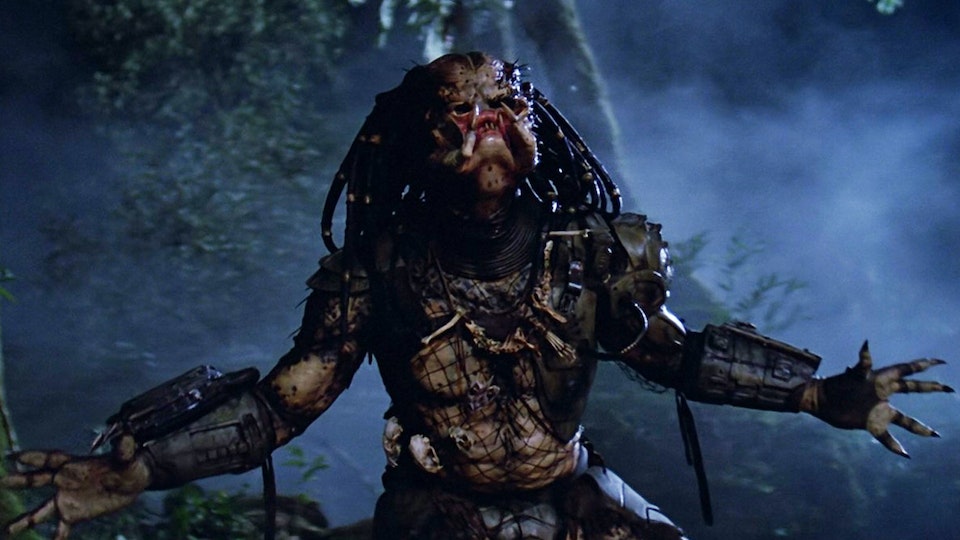 Horror is one of the most popular genres in film. Most companies have a new addition this Halloween season to the somewhat declining, yet still recognizable franchises such as Halloween, Child’s Play and Saw. But while Lawrence Gordon’s Predator franchise is considered by many to be science fiction, its title monster provides enough thrills and chills to qualify as horror. Below is  my evaluation of the franchise, from the original made 35 years ago to the most recent released earlier this year.

Predator (1987): The first installment of the franchise has a simple premise as an alien hunter stalks humans in a rainforest. The only recognizable actor in the movie is Arnold Schwarzenegger as Dutch. Predator is a classic for a line like “Get to the Chopper.” Predator is an interesting movie about warfare in Latin America and adapting to your surroundings. On the movie ranking website Rotten Tomatoes, the film has a score of 80 percent. And I think that this score is justified. It’s a cult classic, with many memorable and meme-worthy scenes.

Predator 2 (1990): Now the hunt moves to Los Angeles, with the alien killing gang members, drug lords and the occasional cop. It stars Danny Glover as Lieutenant Mike Harrigan and Gary Busey as Special Agent Peter Keyes. Many fans of the series don’t really like this movie because it shows that the Predator has morals, refusing to kill children or pregnant women. Very cool to me that the Predator has morals. He also shows off his voice mimicry and swearing. According to Rotten Tomatoes, the movie earns a score of 32 percent, but I think it deserves at least 52 percent. It wasn’t a bad movie, but some of the dialogue doesn’t make any sense. Also, in one scene, the Predator starts killing random unarmed people on a train even though it’s been established that he will only kill people who have a weapon.

Alien vs. Predator (2004): In a shocking turn of events, this and the 2007 sequel aren’t considered to be in the Predator franchise, even though the movies side more with the Predator than the Alien. The movie is okay; if you remove the bad CGI and unjustified character decisions, you would be left with a good 40 minutes of a decent film. The plot is that an alien hunter stalks humans and aliens, in a temple dedicated to the hunters under some ice in Antarctica. There is almost no one recognizable in this movie except for the old guy from Detroit: Become Human, Lance Henriksen as Bishop. The only things we learn is the Predators hunted the Aliens for sport on Earth and were worshipped as gods. Oh, and the Predator doesn’t kill people who are sick. The script was badly written, nothing that the characters do makes any sense and some of the characters are dumber than bricks. On Rotten Tomatoes, it’s scored 22 percent, and I completely agree.

Alien vs. Predator: Requiem(2007): This movie was worse than the 2004 version. The CGI is horrendous. They throw us into this miserable town and expect us to remember everyone’s sub-plots before they all meet up. The only actor of any significance is David Hornsby, from It’s Always Sunny in Philadelphia. There are tons of clichés that make the movie longer than it has to be. The concept of an Alien-Predator hybrid is admittedly cool but not enough to balance out the rest of the movie. The Predator in this movie is portrayed as the hero because the only things it kills are a lot of Aliens, skinning one human and killing a teenage girl by accident. Rotten Tomatoes gives it a score of 12 percent, which I think is generous. I believe it should be 7 percent or lower since this one hour and 42 minutes of screenplay drags like a 3-hour special.

Predators (2010): This movie follows a group of dangerous individuals on a completely different planet, which is basically a giant hunting ground for the Predators to stalk humans stolen from Earth for sport and meat. The recognizable actors in this are Danny Trejo as Cuchillo and Laurence Fishburne as Ronald Noland. This movie was just okay. The plot was good, I was invested in the story, and there were a few twists at the end, but that was about it. The mechanics of the planet are confusing. One character tells the new group of humans that he killed 2-3 Predators in a 10-year span, but the group kills the same amount in one day which doesn’t make a lot of sense. The characters have as much depth as a piece of cardboard. But the character’s design is okay. According to Rotten Tomatoes, the score this movie was given was a 65 percent.

The Predator (2018): To be frank, since I have a Hulu subscription, I could watch all of these movies one at a time, one per day. Then I found out that I would need to buy a $6 add-on subscription for this movie or pay $3.99 to watch it once on YouTube. This movie is atrocious in every way, shape and form. Even though there are some exciting elements, the movie just felt boring. Even though I went onto Youtube and watched a pirated version that cost me nothing except for my time, I felt like I needed a refund. According to Rotten Tomatoes, this movie earns a score of 33 percent, which perfectly encapsulates how I and many other people felt when watching.

Prey (2022): Now we have finally reached the newest entry in the franchise, and what a movie to end this with: Prey. Prey is a prequel, set in 1719 where we follow a Native American woman named Naru. And after careful consideration, to me, this is the best movie of all of them. The movie is well written and the characters feel like they have their own feelings and conflicts. It kind of ties into Predator 2, it feels raw and unsettling and I felt like I was actually rooting for the main character to stay alive instead of dying. This was the most interesting addition to the Predator franchise. The Predator itself was done with nearly all practical effects instead of CGI, which is cool. Rotten Tomatoes gave it 93 percent. I completely agree with this decision, as this movie is my absolute favorite, I’m not sure if it is just my love for history or if it is actually that good. I highly recommend it after watching Predator and Predator 2.

One thought on “‘Predator’ Franchise: What to Watch, What to Skip”